Sports lighting has specific requirements that may not be familiar to many lighting designers. We can learn some knowledge together.

Horizontal illuminance is typically measured on a horizontally oriented imaginary surface one meter (~3 feet) above the field surface. Multiple measurements are usually measured (or calculated during the lighting design phase) on a grid. The National Football League, for example (Lewis and Brill 2013), specifies a grid spacing of 5 meters (~16 feet).

Illuminance of surface depends on angle of illumination.

As the angle of illumination decreases, the lumens per square meter decrease as well, until at grazing angles the surface is barely illuminated at. This can clearly be seen with a sphere illuminated by a single light source .

In practice, there will be multiple luminaires illuminating the field, each of which will contribute to the illumination of a vertical surface — such as a player’s face. It is therefore important to ensure that the vertical illuminance is within minimum and maximum limits so that the players’ faces and team numbers can always be seen.

With this in mind, the “falloff” in illuminance with distance from a single luminaire must also be kept in mind. As shown in FIG. 3, a light source S illuminates two imaginary surfaces, the first one at distance d from the light source, and the second at twice the distance. Both surfaces receive the same amount of light (lumens) from S, but the area of the second surface is four times that of the first. Consequently, its illuminance (lumens per square meter) is only one-quarter that of the first surface.

Generalizing this to any distance, it is easy to see that the illuminance from a single luminaire will decrease, or “fall off,” according to the square of the distance. This is the basis of the inverse square law used by lighting designers.

Uniformity of illumination is important for sports. It enables both the players and the spectators to easily follow the action, and it provides consistent lighting for the television cameras and photographers. Sports field lighting for internationally televised events must meet exacting standards, while more leeway is generally allowed for other events.

There are three measures (or more properly metrics) used to specify the desired uniformity of horizontal and vertical illuminance on the playing field. The simplest metric is the maximum-to-minimum ratio, commonly referred to as the uniformity ratio. Using NFL requirements as an example, horizontal illuminance is designated Eh, and so the uniformity ratio is expressed as Ehmax/Ehmin. Using a measurement grid for the playing field with 5-meter spacing, this ratio for all measurement values must be 1.4:1 or less.

Again using the NFL requirements, vertical illuminance is designated Ev, and the uniformity ratio Evmax/Evmin must also be 1.4:1 or less.

The second uniformity metric is the coefficient of variation, designated CV. Without delving into the mathematics of this statistical value, it can be likened to the point spread in sports betting. (If you must know the details, the equation is:

with details left to the interested reader — see [IES 2009, 2015].) It is basically a measure of how “smooth” the lighting distribution is across the playing field.

The third metric is the uniformity gradient, designated UG. It is defined as the ratio between illuminance values between adjacent measuring points on a square grid. Whereas CV describes the average non-uniformity for the entire field, UG describes the maximum non-uniformity. It is particularly important in sports with fast-moving balls and the like, as changes in illuminance can make it more difficult to judge their speed.

Visual glare occurs when the luminance of the luminaires within the observerís field of view (either a player or spectator) is sufficiently greater than the average luminance to which the observerís eye have adapted. It may cause visual discomfort (in response to which we tend to squint), or it may impair the vision of objects and details (such as past-moving balls and the like).

As a psychophysiological phenomenon, glare is both literally and figuratively “in the eye of the beholder.” All lighting researchers can do is present subjects in a laboratory with a lighting setup and ask them to rate the glare on a subjective scale. While it cannot be directly measured in the field, a glare rating metric, designated GR, can be calculated (typically at the design phase) in accordance with CIE 112-1994, Glare Evaluation System for Use with Outdoor Sports and Area Lighting (CIE 1994).

Central to these calculations are five parameters:

It is important to note that the GR metric depends on where the observer is positioned relative to the luminaires, and the line of sight direction. Consequently, any GR requirements must specify these parameters. The NFL requirements, for example, require that GR be less than 40 for all main cameras (Lewis and Brill 2013).

Our eyes adapt quite well to light sources with different CCTs, ranging from 2700K for 100-watt incandescent lamps to 10000K for the blue sky. Even though the light itself may look colored (FIG. 8), objects seen under these light sources appear to have approximately the same colors, with whites looking white.

The same is not true with television and digital cameras, however, which must be adjusted (color-balanced) to display the colors we expect to see. This is why it is important that all the luminaires in a sports lighting installation have approximately the same CCT. If they do not, the television cameras will display annoying color shifts as they pan across the field.

where the CRI Ra metric is a measure of the average color shift of various colors viewed under the light source when compared to viewing the colors under an incandescent or daylight source with the same CCT. A detailed explanation of color rendering is beyond the scope of this introductory chapter, but the topic is fully explained in CIE 13.3-1995, Method of Measuring and Specifying Colour Rendering Properties of Light Sources (CIE 1995).

Outdoor lighting illuminates not only objects on the ground, but the overhead sky as well.

It might seem obvious that sports field lighting is a major contributor to light pollution, but this is true only in a local sense. According to a US Department of Energy study (DOE 2010), stadium lighting contributes a maximum of 6 percent (compared to 48 percent for roadway lighting and 34 percent for parking lot lighting) on a national scale. (This further assumes that the stadium lighting is always on at night.) 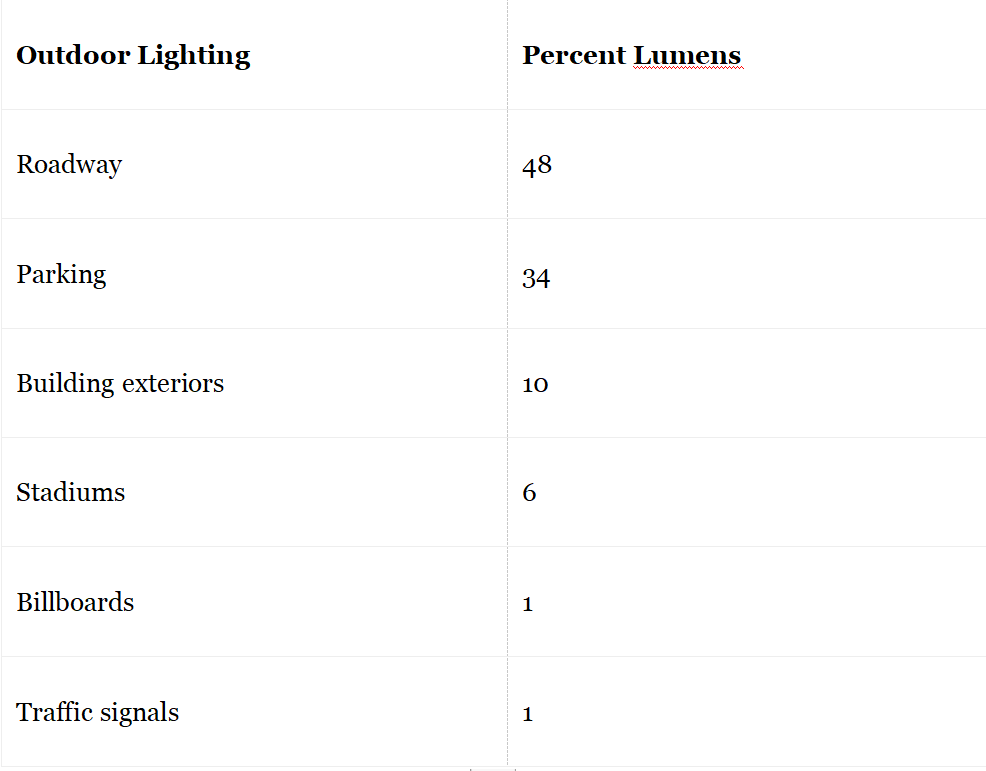 On a local scale, however, light pollution from stadiums and sports fields can be a concern, particularly for surrounding residential neighborhoods. This includes not only light that is reflected from the ground and illuminates the sky overhead, but also light trespass and glare from improperly shielded luminaires.

If you have any questions,please don’t hesitate to contact me: info@aikoled.com. Thanks