The 2022 World Cup kicks off in Qatar in less than two days, ushering in a historic first for the Middle East to host football’s premier event.

During the competition, which begins on November 20, all stadiums will host millions of spectators while showcasing distinctive elements of Arab tradition.

Here is a detailed description of each location: 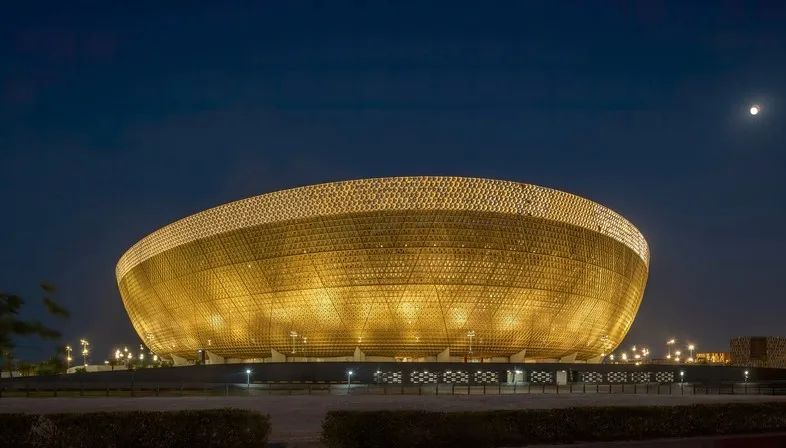 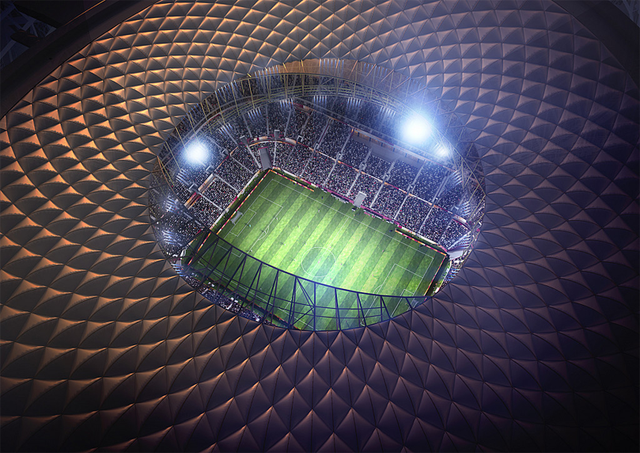 The country’s largest stadium, the 80,000-seat Lusail Stadium, will play home to the World Cup final in 2022.

The stadium is built around the dance of light and shadows that can be seen in the conventional fanar lanterns, claims the tournament website. The stadium was created as a rich reflection of the Arabic culture, exhibiting features from regional bowls, vases, and artwork. The Lusail Stadium will also host the semifinal and six group matches in addition to the final and three knockout stage games.

The stadium serves as the focal point of the brand-new Lusail metropolis and is situated 15 kilometers north of Doha’s city center.

The Lusail Stadium will be transformed into a community hub after the competition, housing schools, shops, sports venues, and medical offices. Additionally, the majority of the stadium’s 80,000 seats will be taken out and donated to sporting events. 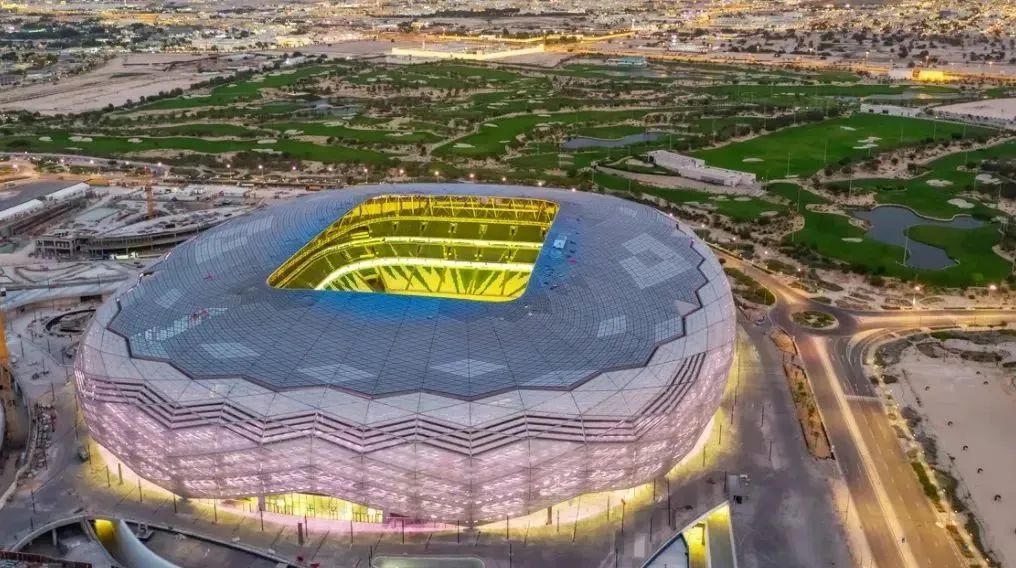 The 40,000-seat stadium is bordered by numerous prestigious colleges and was designed in the geometric shapes of traditional Islamic architecture.

The stadium was constructed with sustainability and the future in mind, down to its special cooling system and the green fields that surround it.

The diamond-shaped stadium’s initial seating capacity is 40,000, which will be lowered to 25,000 at the conclusion of the competition with the extra seats being donated to underdeveloped nations. 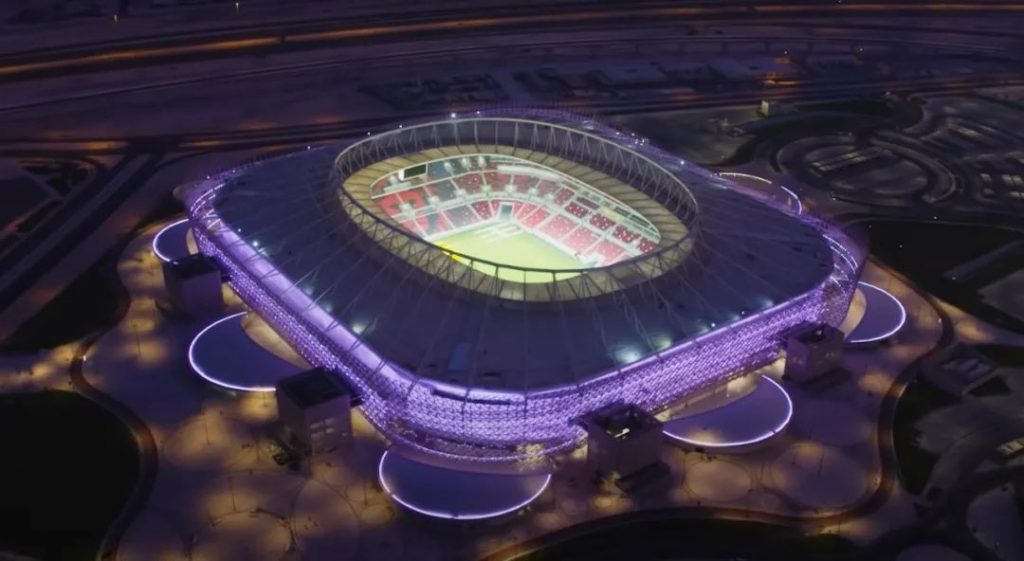 The stadium and nearby structures, which can hold 40,000 people, have a distinctive style that incorporates elements of the neighborhood’s customs and culture. Elaborate geometric designs depict the beauty of the desert, local flora and animals, as well as local and international trade, while the intricate façade mimics the undulations of sand dunes. After the competition, it will serve as the Al-Rayyans Sport Club’s residence in Qatar.

More than 80% of the building materials came from the historic stadium that once stood on the location, and any existing trees were carefully preserved. Fans will be able to commute using the new Doha Metro system, which is environmentally friendly.

Half of the stadium’s seats will be given to international football development initiatives after the competition. 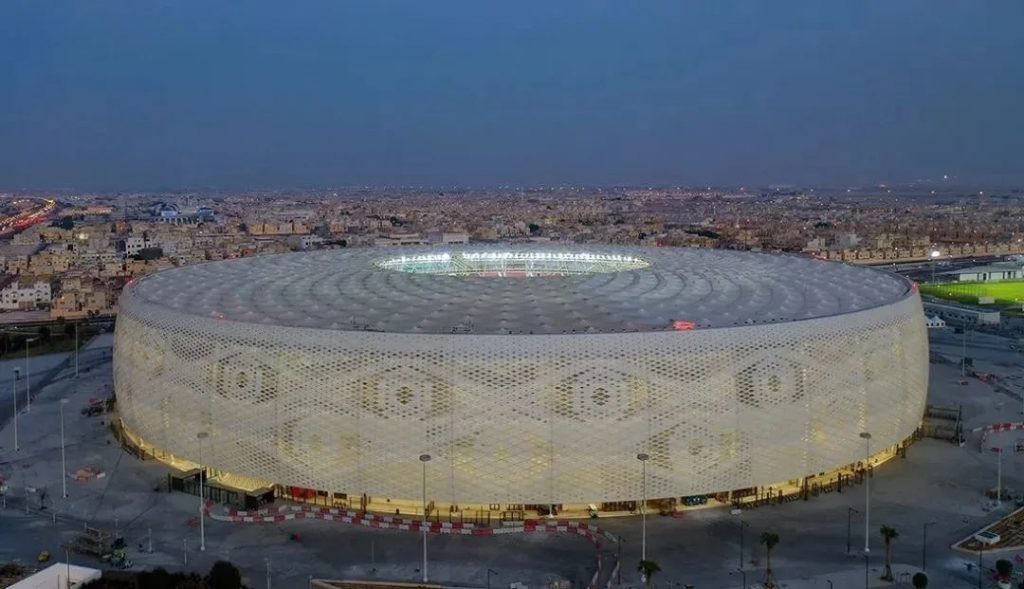 The 40,000-capacity Al Thumama Stadium, which will host a number of games up until the quarterfinal stage of the FIFA World Cup Qatar 2022, was built specifically for the tournament and was inspired by the gahfiya, a traditional woven cap worn by men throughout the Middle East.

Air conditioning vents have been positioned all over the ground, as is the norm at every site, to maintain the ideal climate within the stadium.

The stadium’s capacity will be reduced to 20,000 seats at the conclusion of the event, with the extra seats being donated to underdeveloped countries as a true testament to the Qatari people’s generosity.

The stadium’s upper level seats will be replaced by a boutique hotel, and a location of the renowned Aspetar Sports Clinic will be added. Therefore, the stadium will continue to serve the neighborhood long after the World Cup is over. 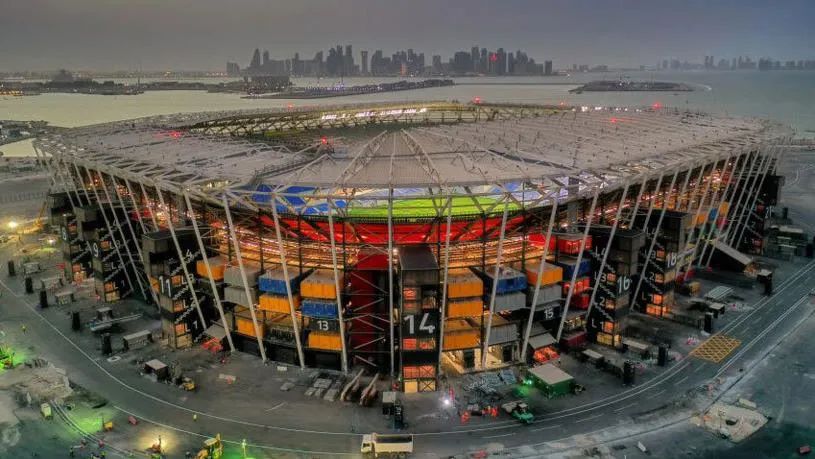 The temporary location is one of the greenest stadiums. It is the “first entirely demountable tournament venue” in FIFA World Cup history and was built with less material than conventional stadiums, setting an example for other architects to follow. 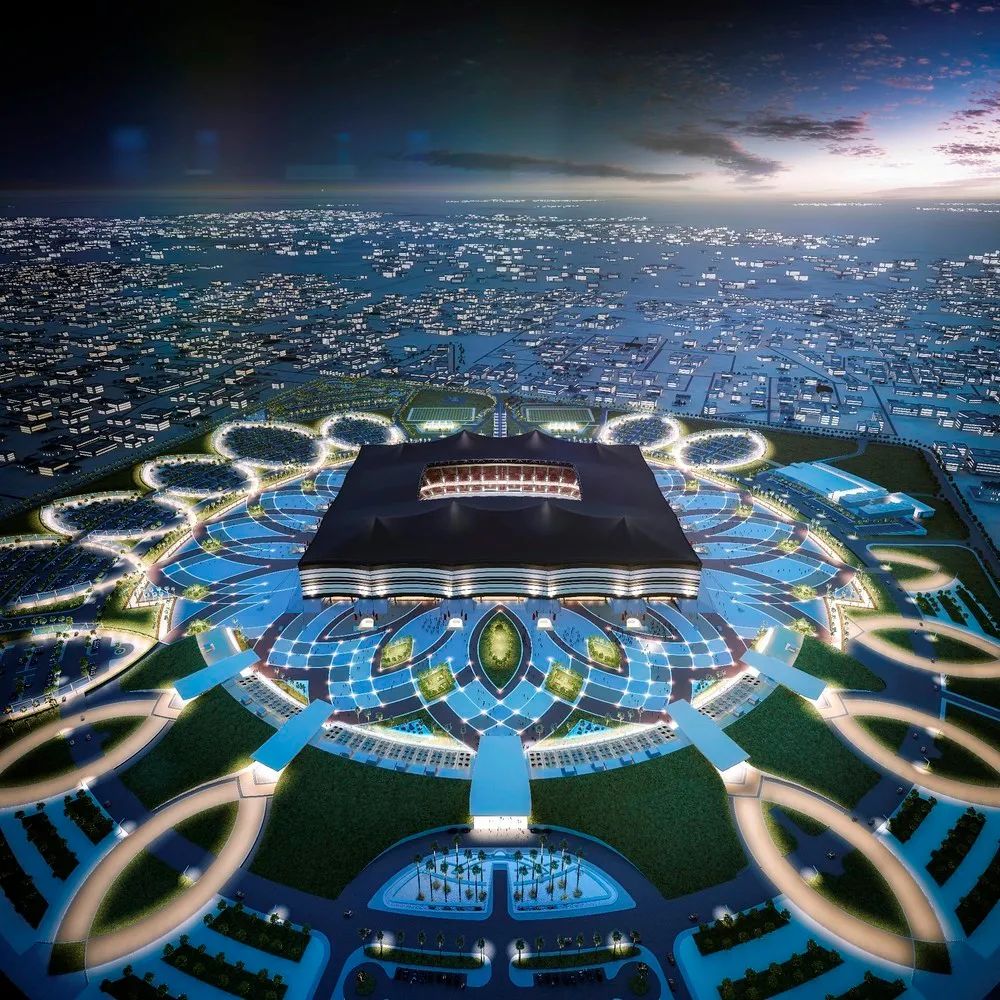 Al Bayt Stadium, which is situated in Al Khor, is designed to resemble the bayt al sha’ar, the tents originally used by the nomadic people of Qatar. Al Khor is well-known for its pearl diving and fishing. The 60,000-seat stadium boasts a retractable roof system and cutting-edge conditioning equipment, so spectators may enjoy the games in comfort.

The opening match, five additional group matches, knockout round matches, including one of the two crucial semifinal matches, and other significant matches at the FIFA World Cup Qatar 2022 will all take place there.

The seats in the stadium can be broken down and used in football projects all over the world in almost half of the seats. 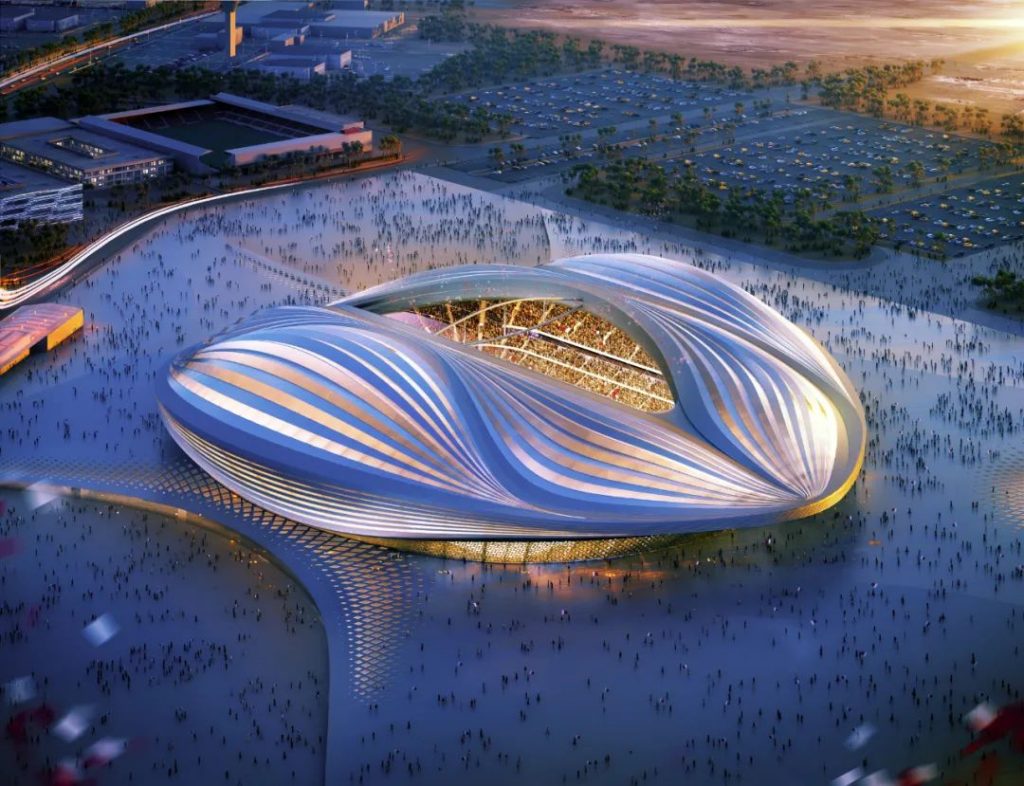 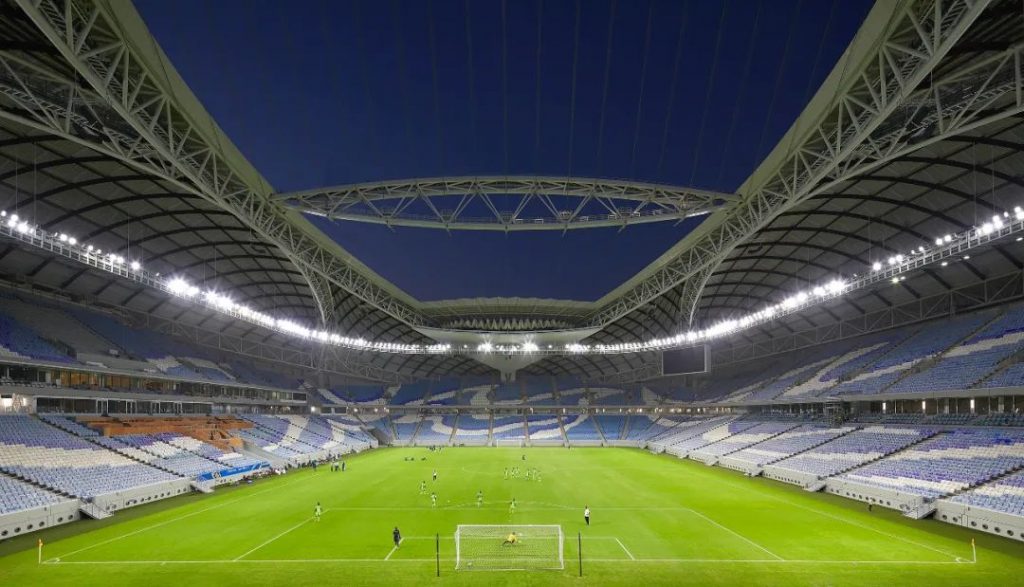 The 40,000-seat Al Janoub Stadium is located in one of Qatar’s oldest settlements and boasts a design that was influenced by the sails of traditional dhow boats as a tribute to Al Wakrah’s maritime legacy.

The structure is meant to mimic an upside-down dhow, and the roof was built to resemble a ship’s hull. The stadium can be used all year round thanks to an innovative cooling system and flexible roof.

Al Wakrah station on the Red Line of the Doha Metro will provide service to the stadium.

Due to the stadium’s modular design, its capacity will drop from 40,000 to 20,000 following the competition, with any extra seats from the upper tier being donated to international football development initiatives. 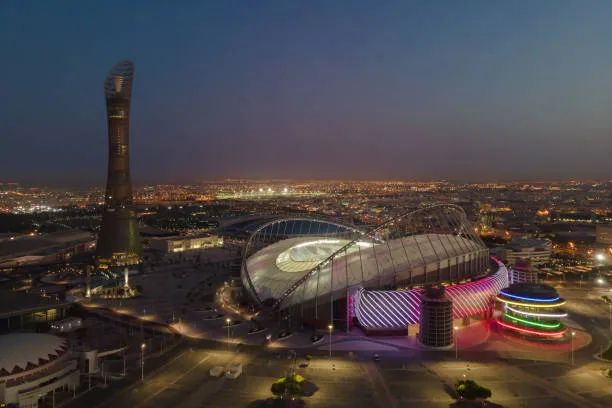 The Asian Games, Arabian Gulf Cup, and AFC Asian Cup have all taken place in the Khalifa International Stadium since it was built in 1976. The IAAF World Athletics Championships and matches from the FIFA Club World Cup Qatar 2019 were held there in 2019.

To get it ready for the FIFA World Cup Qatar 2022, the stadium received a significant renovation. It was the first FIFA World Cup 2022 stadium in Qatar to receive certification from the Global Sustainability Assessment System (GSAS).

Following the renovation, the stadium’s dual arches were preserved, and they are now complemented by a large canopy below, which helps the stadium integrate the new cooling system.

The stadium currently has a new exterior, and the extra tier increased the seating capacity by 10,450 (total tournament capacity: 40,000). The new LED lighting setup gives fans an entirely new level of enjoyment.

The stadium is located in the midst of Aspire Zone, Qatar’s hub of world-class athletics and the site of the 2006 Asian Games. The purpose of the precinct is to promote sports participation. 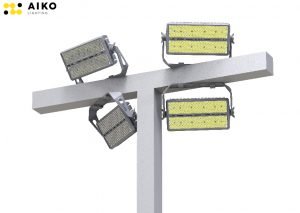 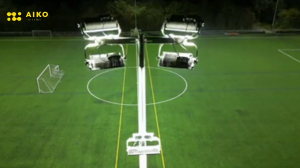